I am Sock Monkey 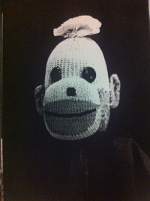 I was somebody once.  I had it all.  I was revered, honoured, top of the pile of a little girl’s toy box.  King Shit of Turd Mountain, so to speak.  Now here I lie – cast aside – but a pale wool shadow of my former munificence, an insipid ragtime reminds of days long gone.

I used to command thousands – sure-footed armies of shiny plastic soldiers, swarming hordes of red monkeys, block-headed lego warriors with painted smiles.  I created and destroyed empires, and the gods themselves trembled at my passage.  But slow, slow – that insidious worm!  That ostrogoth – that vile creature – wormed his way into my kingdom – my council – my trust.  I saw the danger, but too late!  Too late.

I had been usurped, replaced!  By a roundfooted pink silliness of an affair, a long-lashed equine with the soul of a devil.  This, this “My Little Pony” pranced – nay, frolicked – into my affections.  Round hoofs, long lustrous mane, irritating nasally voice – I was bewitched!  Oh I should have known.  What evil resides in the hearts of horses.

Yes.. now you understand what it is that lies before you..  My name is Sockymandius, King of Kings…   and whoever said “A horse!  A horse!  My Kingdom for a horse!” was a blithering idiot.

P.S.  This may have been a creative writing assignment that has loosed itself onto my blog..  And, for some fun reading, look up the word brony…