Woah!! Whaddaya mean you’re not clear on the plot line?

Earlier this month, this blog posted on the idea of optimal experience in life, a state of mind that some have referred to as flow. The concept refers to those times when one is completely absorbed in the moment, whether that occurs when scaling a mountain, drawing a picture, or figuring out an Excel formula (=SUM(no_way!)).

Now, probably the most comprehensive and shared flow experiences occur during childhood, as during play we are completely immersed in the moment and that moment becomes our whole reality.  I mean, what kid is thinking about past or future homework when being chased by a rabid sibling channeling Cujo?

The researcher Mihály Csíkszentmihályi has taken quite an interest in this subject, and his book Flow: The Psychology of Optimal Experience is a fine read for those wanting to know more.  This post however, concerns itself less with the entirety of the book as opposed to the ending sections, where Csíkszentmihályi touches on the intriguing thought of having an overall architecture or purpose that extends over one’s lifetime.  He argues that the potential for quality moments expand when we identify a consistent purpose to our time here, whatever that purpose may be.

To give a tangible example, in 2005 a documentary was released called “The Real Dirt on Farmer John“.  The great thing about this doc was that the filmmaker (at first by accident and increasingly on purpose) had captured nearly thirty years of footage on his friend John Peterson, an eccentric individual with a single-minded conviction to be a successful farmer.  The film – shot in formats ranging from home video to Super 8 – thus affords a rare vantage point of seeing a story arc unfold over the course of one lifetime.  And because this particular person had a particular purpose he kept coming back to, we could see in technicolour hindsight the multitude of actions, good and bad, light and dark, that contributed to his overall life’s meaning (whether he realized it at the time or not).  And thus, through the highs and lows and the wins and the losses, Farmer John’s life was rich in quality and he lived in a greater state of flow.

In the longer term, defining purpose, whether it’s for part of one’s life or the whole of it, in essence allows us to bootstrap many of our supposed incidental moments.  And these moments, given enough time and knit into a coherent whole, can thereby make up much more than the sum of their parts… much like the coloured bits of glass that, stepping back, make up the stained glass window of our lives. 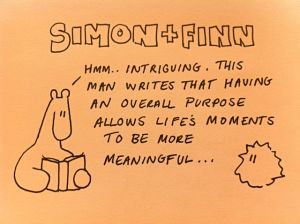 P.S.  Another take on this phenomena was recently covered by Colby Cosh in his sophisticated piece Artisan chocolate and social revolution, where he muses on the future of work in the context of hipster chocolate and strangely long beards.  Although Cosh’s piece is primarily focused on the revival of artisan goods and craftsmanship as a counter to mass mechanization, i.e. “You had better be prepared to be a distinct individual, to treat your particular line of work as a craft rather than a job, to seek out the style or the method or the niche that no one else is in; nobody’s going to need you to knock out pyramid-style copy on deadline or take trite photos from accident scenes…“, one could argue a byproduct of mastering a craft is actually increased opportunities for a flow state.  Why?  Because mastery of anything fulfills several preconditions for flow (i.e. energized focus, deep involvement, clear goals, etc.).  Given that craftsmanship can take a lifetime to master, this sets up a solid framework for a richly fulfilling occupation… gathering Paradise, so to speak.

10 thoughts on “Part II: Flow, meaning, and a state of grace”