BlogTO recently posted about the two cute pandas coming to the Toronto zoo on a five-year loan (“Wouldn’t it be better if the pandas just stayed home?“). The gist of that post was: (1) why spend all that money on pandas when there are so many other native species that could use the funding; (2) some feel the zoo is overly optimistic about how much revenue the pandas will bring in given their ~$1 million/yr price tag (never mind the $200K price tag for imported bamboo!) and (3) to recognize international goodwill between China and other countries via live bear currency seems a little strange (a.k.a. the bizarre emergence of panda diplomacy).

In this complicated world, it seems like the more one looks into something, the less black and white it is – unlike our furry subject, ironically.  Consider a few brief aspects (to do with pandas, less so with international diplomacy):

And there’s a lot more where that came from. It’s a complicated world out there, and it’s sure not getting any simpler.  However, there is one aspect in which many agree, and that is that the future chances of these animals flourishing in the wild is slim (for example, in the wild breeding pandas need about 30km2 of land to support them – but most populations are now isolated in narrow 1.2km-wide fragments).  This means that regardless of how well we succeed at captive breeding, without immediate broader scale and significant habitat protection, the only place we’re going to be seeing some of these animals in the future is behind bars – and that goes for a lot more species than just pandas.

At this pace of development, many of our global brethren are purring, whirring, walking, and running full-tilt into an animated parody of Sabre-Tooth Tiger and Woolly Mammoth exhibits…. and no matter what side of the exhibit you’re on there’s something terribly sad about that. 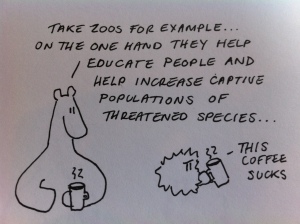 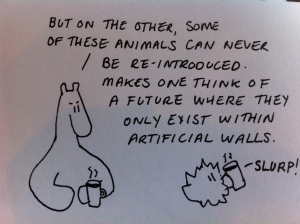 2 thoughts on “Pandas: Available in black, white, and shades of grey”