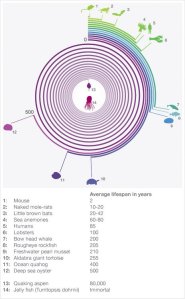 You scoff but it’s true!  There’s this miniscule jellyfish that has supped from the fountain of youth and mocks us with its knowledge with its beady little.. um.. tentacles.  This jellyfish – or Turritopsis nutricula in elite circles – essentially grows to adulthood, decides it’s time for a change, and then converts all its cells to become a little jellyfish baby again – or a “blob-like cyst”.  Discovering it doesn’t like being a blob, it grows back to an adult again, and, evidently not liking the responsibilities of that, shrinks back to a polyp, and so on and so forth (I’m sure the whole time humming along to this sweet tune).

For this species, the process of converting cells, or transdifferentiation, means that the cells can be converted from specialized muscle cells (for example) back to nerve cells or even to inaugural sperm and eggs.  Essentially the jellyfish can convert its mature cells back into a younger state and vice-versa.  In theory this cycle can loop forever, which means that biological immortality does in fact exist here on Earth… as well as perpetual biological indecision.

And I thought I had trouble growing up.  🙂 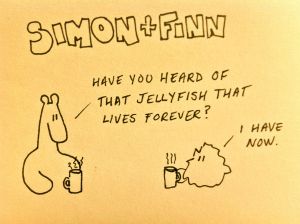 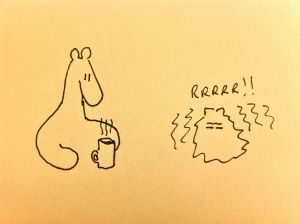 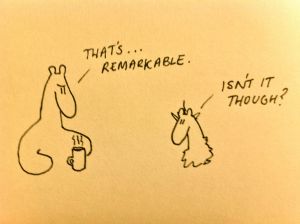 P.S. On a tangential note, recently scientists have inserted jellyfish genes into cats as part of research into Feline Immunodeficiency Virus (and ultimately, HIV).  As these genes make fluorescent proteins, this has the effect of actually making the cats glow in the dark and the result is visible with the naked eye.

While the aims of the related research are incredibly promising, there’s something really strange about making green cats, don’t you think?

3 thoughts on “The immortal jellyfish, David Wilcox, and glow-in-the-dark cats”