I was flipping through a back issue of Philosophy Now the other day, when I was struck by a small piece penned by Ray Cavanaugh.  The piece was about the life of Albert Camus.  Look what a handsome chap he was – 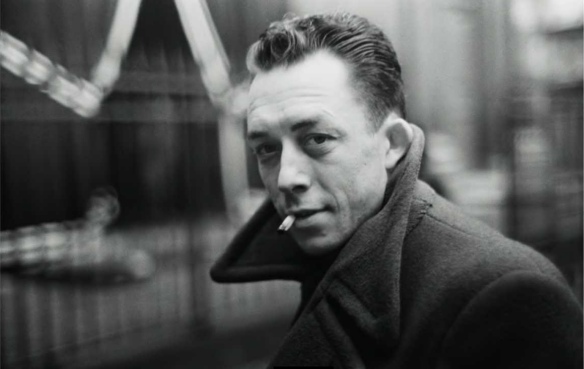 Now, I don’t know much about Camus, but have read The Stranger and remember coming away from that with a disquieting sense of having learned something about the world I didn’t really want to know.  The thing is, Camus seemed to specialize in the utter randomness of things; that abyss of meaninglessness that can cause one to stare morosely into one’s drink and question what the point of anything is.

What struck me about the article wasn’t its tone or tenor, but the simple description of how Camus died.  On January 4, 1960, the car he was in left the road at high speed, killing him instantly at the age of 44.  In his pocket was found the train ticket he hadn’t used after accepting the lift to Paris.  How random this decision, and what a tragic outcome.  One can only hope he would lift a glass in appreciation of this final absurdity.

On the bright side, he left us with one of the loveliest quotes ever penned:  “In the depths of winter, I finally learned that within me there lay an invincible summer.”

18 thoughts on “The Fate of Camus”