About time we oil got serious around here

You have all heard of Dilbert right?  Yes, that Dilbert, the cute, muzzy-headed engineer king of the nerdworld.  What you might not have heard of though is his free-flowing hydrocarbon sidekick: “DilBit”.  Yep, you read that right.  There is a character called DilBit living large on the world stage out there, and he’s worth noticing.

Who, or what, is Dilbit?  Basically DilBit is short for Diluted Bitumen, a relatively new arrival on the Alberta tar sands scheme. DilBit was created in order to get thick viscous oil like bitumen to flow through pipelines (by adding fun stuff like naptha). The problem with Mr. DilBit – aside from his suspect origins – is that he is even more toxic, explosive, and corrosive than previous generations of his oily brethren.  Wait a second, corrosive you say?  Yes, and unfortunately DilBit is the prime stuff planned for the two big pipelines making the headlines these days: TransCanada’s Keystone XL through Alberta and the Northern Gateway through British Columbia.

(As a brief backgrounder, the planned Keystone XL is expected to transport on order of 550,000 barrels of this DilBit per day over a 2,000 mile stretch.  Unfortunately much of this pipeline passes through sensitive areas in the US and in Canada, as in Nebraska’s Ogallala aquifer, the most heavily used aquifer in the US.  Similarly, Enbridge’s Northern Gateway project is expected to also carry 525,000 bbl per day.  This route crosses more than 785 rivers and streams and the headwaters of three of the continent’s most important watersheds – the Mackenzie, the Fraser, and the Skeena.  The route also traverses.. wait for it… a seismically active area).

Ok, so this is where it gets interesting. TransCanada estimates that the Keystone XL pipeline could see – hmm, maybe about 11 spills over the next half-century, with each spill releasing an average of 50 barrels of oil or so.  Doesn’t seem so bad right?  Keep in mind though, that TransCanada’s current Keystone pipeline had 35 leaks in its first year in operation – 21 in Canada and 14 in the US. Other precedents exist, including four large Enbridge spills just between 2009 to 2010, which ranged in scale from 3,000 barrels of syncrude up to 19,500 barrels of tar sand oil.  It doesn’t take a rocket surgeon to figure out that these are orders of magnitude and frequency higher than the projected “11 spills or so, 50 barrels of oil, next half century, tops.”

When you combine this context and history with Mr. DilBit’s little personality quirks, as he is rather a corrosive type with toxic tendencies, what could possibly go wrong? 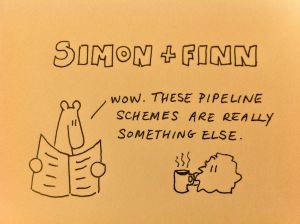 P.S.  I decided a P.S. was warranted as the above only points out a problem.  Setting aside the bigger issue of tar sand oil extraction (as we are principally dealing with oil transportation here), other alternatives to pipelines exist. CN rail for example already ships oil and coal – did you know that 5 – 7 trains alone can match the daily capacity of the Keystone XL, and move five times faster?  Each railcar can carry ~ 660 barrels of bitumen.  What’s more, because the bitumen does not have to be diluted to be transported = no DilBit.

Lastly, because bitumen does not flow at ambient temperatures (unlike Dilbit, which does) – any sort of “spill” would be quickly contained, as opposed to the scenarios posited above.

4 thoughts on “What Dilbert has in common with oil pipelines”