Just another sunny day in the hood..

You may have heard of that unusual new idea to create an underground park in NYC.  Nicknamed the LowLine (formally Delancey Underground), the project was trending on kickstarter.com (155K raised) to create a full-scale demo this spring.  The thinking is to transform a 1.5 acre abandoned trolley terminal into the world’s first underground park.

It’s a nifty idea, replete with the requisite tech-fixes, i.e. gathering sunlight via fibre optic cables to reflect light and enable photosynthesis underground.  The community component is also pretty cool, as you can imagine what opens up to people when you have a year-round green public space available in the hood.  Re-purposing derelict urban areas to augment green space and amp up community vibrancy is a pretty fantastic thing to do in general.

When you step back a bit though, an underground park is bit of a curious idea. It kind of flies in the face of getting fresh air, feeling the sun on your face, and squishing the grass between your toes.  For those old enough to remember, the concept echoes The Secret World of Og, a fantastic underground place populated by green men and um.. mushrooms.

Now, one can definitely argue that the creators of the Delancey Project are prescient, thinking ahead and planning for how the future of how urban design will play out as the human population expands and resources shrink.   In fact, one phrase on the DU website speaks to this very idea, which states that the LowLine is “essentially part of the next phase in urban design, in which human scale and increasing resource scarcity force us to imagine smarter, more creative use of public spaces.”

That’s kind of a scary statement.  Not the LowLine project per se, but the presupposition that the future of urban design is one that “forces us to imagine smarter and more creative use of public space”.  Surely there exist immediately available opportunities for public space that don’t require only a “technology as panacea” epiphany, or some other creatively convoluted approach.

Take High Park for example, Toronto’s little above ground gem.   What a lot of people don’t know is that this park is the result of one guy (John Colborne) thinking ahead, perhaps musing as follows: “Hmm… I wonder what happens if x city grows by y amount.. and if so, perhaps it would be good for the city to have z greenery”.  As High Park was a pretty hefty trip from downtown Toronto at the time, city planners thought his suggestions unnecessary and Colborne had to do a lot of convincing to get the City onboard.  The happy result was that Colborne bequeathed the Park to the City in 1873, and now we have this great green space that over a million people a year visit.

(When you really stop to think about it, Colborne’s legacy is pretty amazing. The foresight of one man way back in the 1800s created a place that so many people enjoy in different ways, and also one that hosts a number of native species.  If you’ve ever spent a few hours in the park, and many of us have, we all recognize how rejunevating it is to spend a few hours au plein air.)

Now, there’s some differences between the context for High Park as it was created then, and NYC LowLine as it’s being envisioned now (i.e. massive growth in population, transportation, urbanization, densification, etc.). And it stands to reason that LowLine may be an indicator species for a new conceptualization of green space that can flourish underground, which would be pretty great.  This said though, it would be a shame if the only solutions available to the future of urban planning – as implied by the Delancey project – were seen as those involving some kind of cool new high tech approach instead of boring old low tech conservation – especially given that it’s these latter projects that tend to stay the course over the longer haul.

Just look what Colborne did over 100 years ago.  Thank you Mister Colborne, you rock! 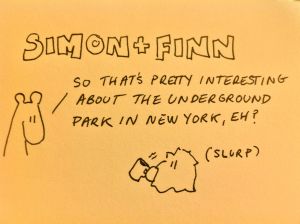 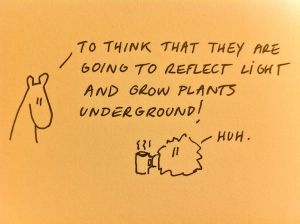 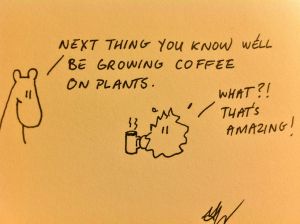 2 thoughts on “NYC’s Lowline Underground: The Future of Parks?”